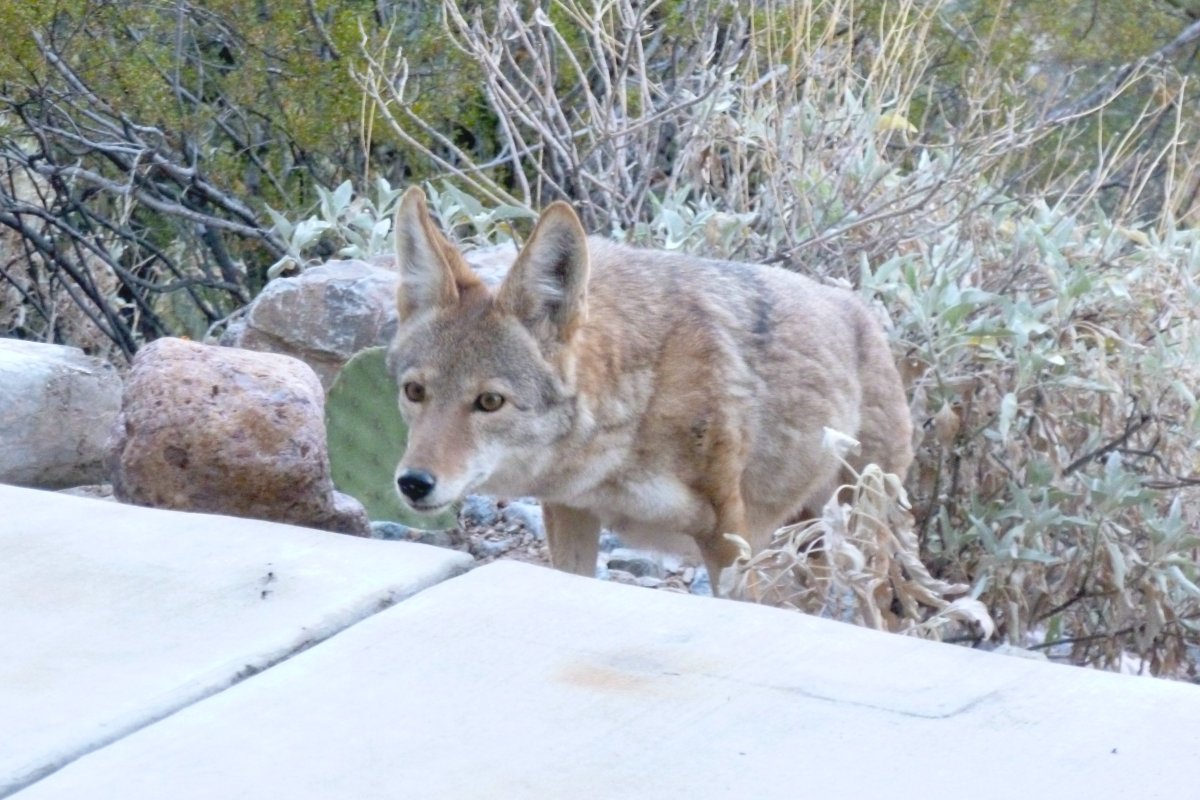 Coyotes have learned to survive and even thrive in our human disturbed environments. In the picture below is a desert coyote looking through our patio window.  Although he appreciates the delicious smells of dinner preparation, this coyote will have to hunt for his own meal in the Arizona desert.

In Native American tales of the coyote, this animal is either respected for its intelligence or the coyote is frowned upon for being cunning and manipulative.  We carry admiration for this wild member of the canine family.  Coyotes have never given us problems except overturned trash cans on a few occasions.

The size of the coyote home range varies from one family to another. Home areas are larger in late winter during the coyote mating season, and smaller in the spring when food is plentiful and the mated coyote pairs are raising pups.

Look closely in the photo above and you can see 2 coyotes.  Male and female coyotes mate for life.

Breeding season for coyotes is January through April.   Gestation is approximately 60-63 days.  Two months after mating, the female gives birth to 1-12 coyote pups.

The video below is filled with adorable coyote pups!

Both parents hunt for food and feed the young by regurgitating their meals. The male coyote takes the lead hunting role when the pups are newborns, obtaining enough food for both his mate and offspring.

Coyotes have large triangular ears and a long, narrow muzzle.  They have an extremely well-developed sense of smell!  The coyote has intense yellow eyes.   As beautiful as this wild animal is; we also know how dangerous and how big the coyote’s teeth are!

Since the dog, coyote and wolf are from the same family, Canidae, there is similar  resemblance. Coyotes have a bushy tail which is usually tipped in black and is carried down when the animal moves.    One way to tell the coyote apart from its cousin the wolf; is to watch its tail when it runs. Coyotes run with their tail down and wolves run with their tail straight out.

We are a family that loves the Arizona Desert. A lot of research and team efforts go into our articles and photos. Come discover the beauty and mystery with us. Don't forget your sunscreen! View all posts by tjsgarden

We love your comments and questions! Cancel reply